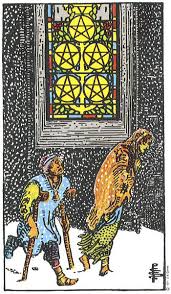 Oh Joy, oh bliss.......NOT! This card represents where we are at presently. July is a month of hardship and suffering for many. Notice the image depicted on the card, it is one of misery and suffering. A cold harsh climate and being left out in the cold hard world.

If you look up close at the window of the church behind the couple you will see; what appears to be two little grey castles that look like they have been at war. Below that you can see a vine with fruit growing abundantly, that fruit as well as the pentacles represent money, wealth and abundance. You could say what humanity has harvested the fruits of their collective labour. It also alludes to the Knights Templar and their wealth, some of which was used in alms for the poor, to which the Vatican took umbrage to; and were the enemy of the Templars.

In reality however the reality for others is the exact opposite, they are sick, impoverished and feeling rejected and unloved by others. This my friends is where we humans are at present. Watch the cost of living go up past the reach of more people coming up. The oil prices will lift again making using your car a luxury; and not a right for many people.

People are still waiting to be vaccinated, but many are also not wanting the vaccine. Thus we have a duality just like in the card above. The haves and the have nots, sick and healthy. working or unemployed. Relationship break ups, or new relationships.

Again look at the couple in the card, he is crippled and dependant on his wife. He is struggling to keep up with her. Only the strong and healthy survive this card tells us. However we can turn this around and help those in need. We can donate anything that we can afford to give. Keep that in mind, what we can do in a positive way to help others in need. Not reject them and let them suffer. That is what it means to be human and care for the less fortunate in our world. These imbalances do not have to be, they are allowed to happen because others are indifferent to suffering.

On a friendship level this current world situation can divide friendships, some friendships may come to an end over beliefs. One must stand by their beliefs because everyone is entitled to their own opinions and has the right to uphold their principles. No one has the right to disempower or disrespect anyone else. Free will being violated causes an energy imbalance and if not corrected leads to more discord.

Is it worth losing a friendship over a differing of opinions? We must think carefully on that because it is not as cut and dry and some may think. Allow others wiggle room and be tolerant without  causing yourself to lose. You don't have to play the martyr ..no one does, that is a free will decision.

Keep it cool people and don't poke the bear, they do bite.