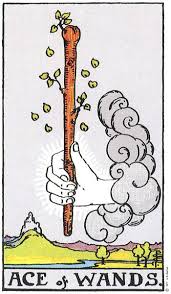 Breaking away from the crowd, adventure.

These are the key words for the Ace of Wands. Wands represent the mind and willpower. I get the feeling of universal thinking, many people showing independent thought and challenging beliefs this month. There is a feeling of individuals breaking away from the crowd and going it alone, Changing what they think and believe. I see this as a positive thing in difficult times.

Challenges  to authority is indicated here and orthodox belief systems. This could be political too, in such countries with conflict such as Myanmar. Many countries are going through great change at present including my homeland Scotland. Scotland is seeing a massive division in popular opinion in regards to their political and religious beliefs and national identity. This can have a catastrophic effect if not handled carefully.

Upheavals are indicated globally and seems to spread, not necessarily politically motivated per say, but  people have opened their eyes to current events, which will continue to unfold for many years to come. If you recall my prediction when I said Goliath has awakened;; this feels connected, and it will have a flow on effect globally.

More lockdowns yet again, these seem to be rolling events in random areas globally. Stay vigilant and be sensible. Now some individuals will show revolutionary thoughts and ideas, pushing the envelope until things boil over. The government need to keep an eye on dangerous individuals in Britain, the US, Australia and Europe. I see some Asian counties showing instability too. These are small nations where corruption is rife.

Food scarcity is present in some of these asian small nations and this causes people to panic. The government response is harsh and heavy handed. As is the case with Myanmar. I do feel conditions will become harsher; to keep people in line. Sweeping changes there will usher in intimidation and more fear. School closures for a period of time due to safety and also control.

China may just step in to the Myanmar situation to prevent any attempts from the west to help out. I do not think they will put troops in there, more like telling the dictatorship to fight harder and lift their game to keep control. China does not want to invest men unnecessarily. Myanmar is about to explode with violence yet again. I also feel a lack of medical care here too. Insufficient amount of doctors and nurses to cope with the demand.

Keep an eye on Eastern Europe too as things start to build up with Putin showing no fear of the west and no real opposition to his military might. Putin is patient and knows when to line up his ducks. He does not back down though. Eventually Russia will have to chose between China and the West because China will never play second fiddle to Russia, that just ain't going to happen. They will never take a subordinate roll with anyone.

I do feel the world economy will face some challenges starting in May, but I feel it will yo-yo and make it hard to predict when to buy or sell shares etc. I do feel there will be a big surprise with some shares, where a large sum of money can be made quickly and then things will drop again days later. This could be towards the end of May.

I do get the feeling of something big politically speaking; happening in May, I feel this involves the USA.  I get the feeling of surprise, or an oh wow moment. Expect this to be in regards to China and the south China seas. That little castle to the left in the card makes me think of the military base that China has built in the sea and I feel China pushing the envelope a bit more to antagonise Taiwan. Taiwan must wait and not jump the gun yet.

This card tells us, make no mistake the hands of power have a very strong grip on events and it would be very unwise to rock the boat. This feels like world powers, again meaning America and allies have a very strong grip. They will not relinquish without war. I feel their cards are very close to their chests at present, but someone in this group is letting information slip out to China. China (CPR) has a self inflated ego, however they do not have the strength that they make out. Expect things to be tense as time goes on. BUT please hold positive and good will in your heart and mind for all of humanity and the beautiful animals of our world.