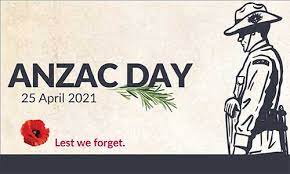 This year I am very disappointed with the reduced number of  people allowed to attend and participate in this most important day in Australia.

Yet the government had no problem with the mardi gras, protests and other social and sporting events being able to have vast numbers attend, yet this most sacred day to all Australians is being disrespected. This is a political move and it should not be tolerated; when other public events are well surpassing the numbers permitted to attend this vitaly important event; and is part of our cultural heritage. It is now being used for a political agenda that is most repugnant and offensive to decent Australians and a slap  in the face of all service members and their families. As a daughter of a serviceman I am outraged by this gross insult.

It is painful to see old people that served in all our military services denied their right, many of whom may not be with us next year. Many recent service members are also feeling this insult to their fallen mates, is this fair on them and their loved ones?

ANZAC Day is being used for a dark political agenda, and if the public just sit back and accept this then the powers that be are clearly aware that they have the green light to abuse our sense of decency in any way shape or form. Shame on you that allow this abuse of power! You insult those that gave their lives for freedom and freedom of speech.

We also have no public threat of Covid. Make no mistake this is a politically motivated stunt and many have seen right through this lie.  Shame, Shame, Shame!

This is a bloody disgrace fencing off these people that have the right to be here. It is a slap in the face to our service personnel and their families. I would be absolutely livid if my father was in this situation of only allowed to look on through a wire fence. Remember some service personnel were behind wire as prisoners of war, and bear the mental scars still.  Segregated like this just shows the government has no respect and obviously doesn’t care about those that gave their lives for us. They have seen such horror that most politicians could not cope with, but deem the former and current  military personnel unworthy to rightfully participating as normal. Not just that selling a limited amount of tickets is insulting, these people have the right to be here and should not have to pay for the privilege. This is a human right, not a bloody privilege. Is is not a privilege to be made to go to war ( read business transaction)  to fight a rich bastards war either. War that was not caused by ordinary people either, they don’t have the power or abilities to create wars like this. Any one that thinks so is misinformed.

The virus is no threat to ANZAC Day attendees, just the same as it was no threat to the bloody Mardi Gras attendees. This is political and a bloody insult. I am absolutely sickened by this, and sickened by the sheep that just accept this. Just remember one thing from this,; when the next war comes, and it will, your life means nothing to the government. My father and men that served with him were shat on by the government and no bloody help for them. My father never complained, he just got on with life. He did his best like all good men.

No help for the homeless veterans of today either. If you want to know about homeless veterans take a hard look at the last two world wars and how the government shat on them. War is nothing but a rich bastards business transaction using us as fodder and kick us to the kerb when the powers that be are satisfied. Do you see homeless veterans at the ANZAC Day March? No, they are hidden from sight. Think of all those that return from service and take their own lives too. There have been many in the past few years alone. I have spoken to them in spirit for clients and it never leaves me. You don’t forget this feeling I can tell you.

You want to live with the mental scars of war? Or be the kids of veterans affected? Get one thing straight right now. You will be facing it soon! Deal with it like the rest of us do; oh and get used to being disrespected by the scum of society, the cowardly leftist scum . Because factions of government created them as a toy of division.

I have never expressed my utter disgust and disappointment at the lack of respect for service personnel by our government until now. But heed my words, your family will face this pain ,the arrogance and indifference from the government and leftist scum in the near future. Then see how you feel about the disrespect and some one telling you if you have the right to honour the dead or not on ANZAC Day!