Ever heard of the Jack Russell Tax? 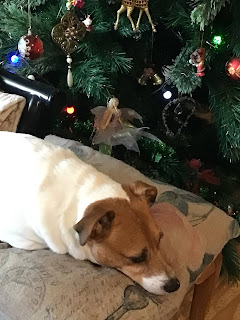 We have a special tax in our house, it’s called the Jack Russell Tax. Every cup of tea, every snack, every thing you eat incurs a Jack Russell Tax 🤣🤣 Ruby is beside herself if you dare to sit down with a cuppa. She is just about up on your shoulders going after your tea. She doesn’t want her own tea cup oh no; it has to be your tea cup. Hurry up human, don’t keep me waiting. Oh, what tea is that? I only like Earl Grey tea!

This is the dog that could be out in the garden, in the bedroom or anywhere; she intuitively knows the kettle is on for tea. Before you can say Bloody Mary three times she is right next to you. No flies on Ruby that’s for sure. Oh, you were thinking of going to the cupboard to get some chips mum, count me in.

It is part and parcel of being a Jack Russell parent, but we wouldn’t have it any other way. Even when you have to be sneaky and eat goodies in another room with the door shut, lol. But that would be mean wouldn’t it 🤪🤪 Happily we just cough up the Tax.