I am surprised that the ABC actually ran this article giving they are so left they might fall over, especially since it’s a Labor government back in power. The embarrassment and offence caused to these servicemen is disgusting, to be questioned on their military service by prospective employers. This is down to government incompetence which has caused distress and serious embarrassment to these young servicemen for many years. There should have been a special category created for these men, that were discharged due to the end of conscription. It should have been well published for employers to understand that these men were the last of the conscripts.

This is just laziness and ignorance on behalf of the government and buck passing for decades, again as in 1972, a Labor government in power again. The usual misfits that screw things up whenever they are re-elected. Not that the modern Liberals or the National party are much better these days as the lines have been so blurred that they are obliterated.

I am not sure if this situation requires an act of parliament to make the changes required for these men. A public apology and individual letters with their service serial numbers should be done first and foremost if these men are to be rightly given their well overdue acknowledgment of service and an new discharge category that clearly shows why they left the military service.

Without leaving people wondering if they did something wrong, which would affect them for the rest of their lives, and an embarrassment every time they went for a job interview, or in the years to come a family member discovers the discharge certificate when tracing their family tree, and wrongly assumes their great grandfather was given a dishonourable discharge.

That must be cleared before these men die as many old men may not “Rest In Peace”, with this hanging over their heads and the possible embarrassing situation of someone mistakenly thinking they were badly behaved or a criminal that was kicked out of the military. That would be classified as a dishonourable discharge of course. Their actual military records need to be amended too, showing that they were discharged only because conscription ended. Gough Whitlam has a lot to answer to, because he was the one in charge of the nation when this screw up occurred.

“Support is available for service personnel for mental health”, yes well the reality of that has been exposed recently by the investigation into suicides in the military and the poorly functioning health service provided to the service personnel not to mention the stigma. That is all over the internet at present, and it is a disgrace to the military that men are left to struggle for so long that they take their own lives.

I though that we as a nation were better that this, after the way the Vietnam veterans were treated so appallingly on their return from a hellish nightmare. Our government has not progressed very far from those days, fake virtue signalling is as far as they go but never follow up with real help for veterans. 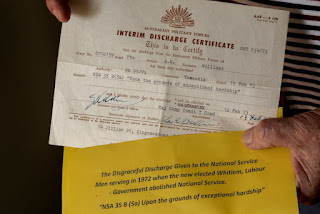 I am utterly disgusted and highly offended

Do you go to a doctor and ask him if he is properly qualified or a solicitor or a trades person? No, of course you don't it is rude and...