The Igigi or Angels 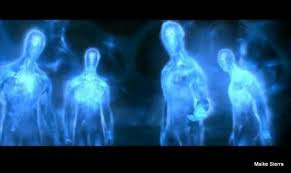 According to the Wes Penre Papers ”A Journey through the Multiverse", Level One; on page 239, the Igigi were a race of beings that colonized
Mars thousands of years ago and also had a strong presence on earth. Wes believes these beings to be what we call angels, which means god's helpers.

If you recall in the Christian bible; it says angels are god's servants and, do not thank them. One must thank god only (En-Ki/Lucifer, is the god of earth as clearly stated in the bible). I also feel the blue opalescent beings such as the ones in the above image are the supposed angelic beings.

I have seen blue opalescent beings many times; they do not show their faces ever.  I have  these beings in my house often, sometimes standing near my bed at night time. On one occasion when one of  my nephew’s was small; he came to visit with his parents and standing right next to him as he sat at the dinner table, was  a supposed angelic being. It was exactly the same as the other blue opalescent beings that I have seen many times; and whom many people have written about.

Generally they do not communicate with me; they seem to just watch the people that they appear next to. I do not feel these are spirit guides, otherwise I would be told so.

One very interesting experience during a reading that I will never forget was; the client’s father appeared in spirit; and started to show me the birth of his grandchild. This was to let his daughter know that he knew of the birth. To my astonishment I was allowed to witness the “soul bearers” assisting a soul going into the body of a new baby at the time of the birth. These beings were also the same opalescent beings but with a white shimmer to them.

How I know what these beings are, is a strong feeling, Clair-cognizance which suddenly comes over me when the being appears.  But why would any being hide its face or disguise itself? To me, that says there is something else going on. Something I do not like nor trust.

A benevolent being such as a loved one will not generally use a disguise; they show you exactly how they look as you knew them in life. On the odd occasion; though they too will put up a white column of light around themselves.

I have seen this done by loved ones in spirit, for my clients. My mother has also done this when working with my father; when he was working as a spiritual healer; during public displays of spiritual healing. People would comment to him about seeing a pillar or column of white light next to him. To which he would say that is my wife working with me.

The reason the spirit gives me usually is; it’s a surprise for the client. I don’t think that is necessary and just becomes a distraction to their purpose of being there. Why do they feel the need for the disguise? If they are honest and well intentioned beings, then no disguise should be necessary.

It is your right to insist that any being shows you exactly what they look like, so do insist on this. This is for your own good and welfare, please remember that. If the being refuses to do so; then you must tell it to leave you alone. It clearly does not come in peace.

I have sat in psychic development groups and meditation circles over the years and these blue opalescent beings have turned up. The last time that I took part in a meditation circle these beings manifested again.

These opalescent beings stood right behind everyone in the group except me. That was because I refused to have them near me. There were more of these beings in the middle of the circle too. As they came closer, I warned them to leave me alone; and told them I knew who they were and do not touch me or take my energy.

As they moved to each member in the group, it looked like they were manipulating the consciousness of everyone taking part in the meditation. I do not call this benevolent; I call it interfering with divine beings. Many of the people have no idea either about the free will factor and whom they are really dealing with. They just innocently go along with the exercise honestly believing that these beings are there; out of pure and unconditional love. I must point out too most of the people cannot even perceive these beings being present.

I do not think these general meditations offer anything of true spiritual value.  That wisdom comes from going deep within one’s self, connecting only to ones higher self in complete safety. You do not need to be part of a circle. This is about energy, your energy and you must protect that which is yours.  I also feel that a Clairvoyant person needs to witness what goes on at all psychic gatherings and really needs to be aware; of whom the supposed spirit beings are. This should be done as a public safety measure with a duty of care for all who participate.

One must use the correct psychic protection prior to commencing such an exercise too. By gold lighting (which is the highest of spiritual protection) the room and yourself, before and after the exercise to make sure you stay cleansed and protected and that nothing comes in to the room that should not be there, nor attaches to you.

It is important to know, we humans are divine spiritual beings; with the essence of the divine within us. Most of humanity has forgotten this fact. This is because the truth has been removed from their consciousness deliberately by religion and other ways to separate us from the true divine.

So who are these supposed angelic beings and blue opalescent beings? One strong theory is they are the Nephilim or the shining ones; this may also be who the Igigi are. They are mentioned in ancient texts pointed out at the start of this article.

They do have an agenda or they would not be here and to think otherwise could be naive. They most certainly know the laws of the universe and laws regarding duality and how to manipulate them.  Humanity clearly does not.

What I do suspect about these blue opalescent beings is, they could be avatar bodies or light bodies; used by other beings for any number of reasons and not just nano travel. They all look identical with no distinguishing features or markings.

We are told cosmic law or universal law must be adhered to at all times or we and any other star /spirit beings will be held accountable, should they break this law.

Who actually dictates how cosmic law is to function?  Is it the Nephilim or another race like the Annunaki?
I doubt it was benevolent beings with the highest intentions of pure and unconditional love. Otherwise we would not be locked into the low vibrational frequency of the third dimension with war, poverty, suffering etc, in a never ending cycle for our energy to be harvested by evil intentioned beings.
Free will has been used for millennia to excuse evil existing in our world also. Many believe this was done by intelligent design with one single purpose in mind.
The Earth is a living library for the whole universe to use peacefully, and to learn from. Humans are the rightful custodians of the Earth. That is something I understood as a very small child, It again was a “knowing”.

We need to go back in to the past for the answers to set our souls free, but that is only the beginning of the new journey that each individual soul must make when they are ready.

It is important to research continuously for good sound information. This is not an area to be taken lightly. It requires dedication to your beliefs and an open mind; which must be flexible.

https://www.youtube.com/watch?v=dcpVrtv2t-M
In the above link, the Pope is admitting Lucifer is the god of Earth. In order to not break cosmic law one must declare the truth and intentions to everyone. There is no rule that says this cannot be obscured though, as long as the information is disclosed that’s all that matters.
Copyright © Alex Fulford 18 April 2017

https://en.wikipedia.org/wiki/The_Unquiet_Dead
Blue vapor entities, entity attachments, Igigi? It is possible for these to be one and the same. If so they are in no way benevolent.
at Sunday, March 07, 2021