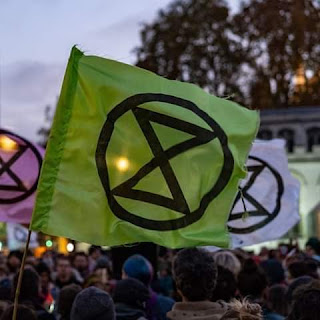 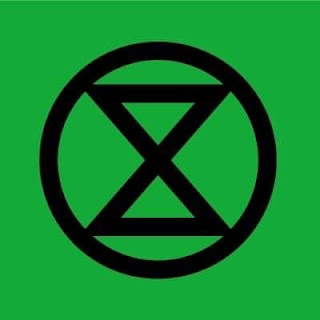 I noticed the symbol for the group Extinction Rebellion and smiled to myself. It is in fact the Rune symbol Dagaz  from Tyr's aett, it represents the number 24 and the letter D in the English language alphabet. Dagaz means day, it is pronounced as Dah Gahz. It is also a symbol of clear vision and enlightenment.


Dagaz relates to the daylight hours (enlightenment) and to tie it to a specific time, noon.  Dagaz also alludes to Thor the god (Lucifer the light bearer?) of lightening and inspires inspiration, awakening and transformation.

It is also used in magic rituals to invoke change. Hmmm casting a spell on the masses perhaps. This symbol can be worn as a symbol or an amulet for protection.

So I wonder if this rune symbol is used say, as in the mass events such as Extinction Rebellion could it also be a magic ritual to sway mass consciousness?  An awakening but to who's benefit? Mass events are well known to be used for energy harvesting too, as they reach their pinnacle at the designated meeting area.

I am always rather wary when I see signs and symbols used in this way, as it speaks of the people behind the event are trained in the occult/esoteric arts  and they are fully aware of what they are doing and it is not for our benefit, quite the opposite in fact.

Most people attending mass events have good intentions and care very much about nature and our environment, however people can be misinformed of any purpose or agenda regardless of what the issue is. I feel this is something to take a closer look behind  this movement and what it is really about.

Now lets take a look at the positive interpretation of this symbol. It is generally a positive sign to have in a reading, if life has been in a rut, it lets one know that a change for the better is afoot.  A time for waiting is now over and a major event or turning point is around the corner.

Dagaz  also lets one know that if we work hard we will move forward. This symbol can represent protection in new situations  or when new people  come into your life. Generally a happy sign.

Dagaz is also a good sign for good health, prosperity and completion can't argue with that.

One interesting meaning for Dagaz is it can reveal secrets, which can be either a good thing or a bad thing depending on the situation. On a negative meaning it can show blockages  or prevention of you succeeding in something.

Other negative interpretations  of Dagaz are you are drawing problems to yourself by thinking too much about them. That is basic law of attraction, what you think of most you will create.  So it is wise to be very careful of what thoughts and intentions we hold, lets we create them.

But other than that it is generally a good symbol.

Now looking at other parts of the symbol or logo (word)  There is the circle around it and the colours green and black. All of which have dualistic meanings.
As I said before, what are the real intentions of the top individuals behind this movement?

The meaning of the circle has so many meanings, so here are some, Revolution as in both meanings of the word.

The colour green meanings both positive and negative meanings and psychological meanings.


The balance between the heart and the head.


The meaning of the colour black, both positive and negative and the psychological meaning.

Black is also a colour of seduction and wealth, luxury, think of evening wear and the little black dress or a black tie event.


The clergy also wear black  for spirituality, but it is also an absorbing colour, think of absorbing energy such as emotions (energy harvesting ).

Whether intentional or unintentional. We must never take an other person or an other beings energy, that is very wrong.
Black conceals or covers where white reveals or uncovers such as the truth of a matter.


Black is used for wealth and many retail stores insist their staff wear black, now remember black is an intimidating colour, it can be seen as unfriendly too. Whether the company owners are aware of this or not nak3s no difference, it still works.

I would say there would be many in positions of power that are fully aware and of the importance of colours and why they choose particular colours for the energy they convey along with the message.

Now looking back at this Extinction rebellion you can see a subtle message forming. This is a well thought out method of communication, and a form of mass control.

It fits right in to the UN agenda 30 plot. Keep an eye on this movement for further social changes instigated by them or the government. This has all the hall marks of more loss of freedom for the masses yet no one is picking up on the reality of

https://www.telegraph.co.uk/business/2019/10/19/extinction-rebellion-backer-chris-hohn-builds-800m-stake-heathrow/
UPDATE: March 21, 2021
Last night I was reading more of the Templar Revelations book, and I came across a mention of a lady dressed in red clothes being part of an Egyptian esoteric cult. It made me immediately think of the people involved in Extinction Rebellion and the occult symbology employed by them.
It is entirely possible that this group wearing red clothes are conveying several layers of esoteric messages. One interpretation  could be the cult if Isis (ancient Egyptian cult), but red also alludes to Mars energy (war and conflict), male aggression, blood, or the base chakra, as in low vibrational energy of negativity.
The clothing as a ritual is definitely pagan, the page number where I found the quote about the lady in red is page 278 of the Templar Revelation by Lynn Picknett and Clive Prince. The quote is as follows,
"Egyptians address their Queen Isis as Mistress of the gods....thou lady in red apparel...Mistress and lady of the tomb".
The book then goes on to say traditionally the Magdalen is depicted wearing a red dress.
Quite interesting don't you think? Myths within myths and secrets within secrets, in all secret societies that only initiates are permitted to know. We are talking bloodlines. They then advise their loyal subjects on what they want them to do. Only the elite know the full rituals and their meaning and reasons. It all smacks of elitism and duping the dumb masses to follow blindly.
https://psychictarotreadingwithalexfulford.blogspot.com/2021/03/the-templar-revelation-by-lynn-picknett.html
The Templar Revelation link.