During a trip to Victoria this weekend, I went into a shop/ museum in Glenrowan for a quick look around. Well that quick look around was longer than expected. As soon as I walked into the shop there was a very strong spiritual presence. It was a pleasant feeling though. http://www.katescottageglenrowan.com.au/kates-cottage

Three children were there in spirit, two girls and a boy. The oldest girl had long fair hair and was around 12 years old, she has a sister who also had long fair hair. I would put her age as about 10 years old. Then a little boy who I assume was their little brother. He was very dark haired with freckles and green eyes, I put his age around 5 or 6 years old.
These kids were rather savvy, street smart. Around them I could see the dirt of the ground. So I could have been seeing them on that site before anything was ever built there. The kids followed me around the shop wondering what I was doing. They seemed likeable little rascals, but not shy of nicking what ever they could get their hands on.  I put them on notice not to steal anything too. Yes, spirit beings can and do take items.

The children were in Victorian styled clothing and the town of Glenrowan in Victorian times was just a dust bowl with tents and a crude local pub run by Ann Jones, and a couple of other buildings. So it was a very hard life for families. The women knew real suffering and loss.

I told the lady working in the shop what I could see, she was very interested; and could definitely say that no one has ever commented on seeing any spirit beings in the shop ever. She did say, people do feel a pleasant energy when they walk into the shop. I told her that was the children they were picking up.

To be honest I am quite surprised that no other clairvoyant or psychic has not commented about this. So let this stand officially on record now. Yes there are three earth bound children in the shop. I have told them they do not have to stay there. They can move on if they want. That will be up to them. Sadly I didn't have the time to help them, perhaps that I can do shortly. But again you cannot make any spirit leave if it does not want to go. That is breaking cosmic law.

As for the building itself, this is not the original site that it was built on. There was a service station here in the 1920s up to around the 1950s. I do not know the exact dates. I am only going by what the lady could recall off the top of her head. She was a wealth of knowledge of the area. So the current building was moved here brick by brick after that time from further up the road. I don't recall all the details, but I am sure it will be in one of the books at the shop or you could ask the lady at the shop the history of the shop and why it was moved to that particular area. It was for practical reasons though.

Now I do not think the children had anything to do with the Kelly gang's shoot out with the police. That took place around the corner from the shop. I didn't get a feeling of them being connected other that they happened to live there at that sight. I got one name for the older girl, however I will not be giving this name out to anyone. For the simple reason that people suddenly say they have spoken to the girl in question, imaginations then take flight. 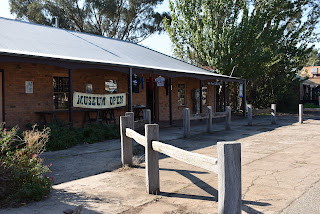 Th siege of Glenrowan was around the next street, just over the railway bridge and the first street on the right. Ann Jones's pub stood right on the corner of the street known as Siege Street. My heart goes out to that poor woman losing two of her children in the shootout and her pub being set on fire by the police to get the gang out doors, not much thought to the hostages though.
I walked around the area where the shooting took place, its not a very big area. So I was rather surprised when I saw it. But back in the 1880s it was totally different. All that was there that is still the same is the bridge, the railway line and a couple of wooden buildings. There is also replica building of the original railway station and perhaps the blacksmiths building is a replica. I didn't bother going in to that as it is still a commercial building which is up for sale at present. The real estate agent was there with prospective clients. 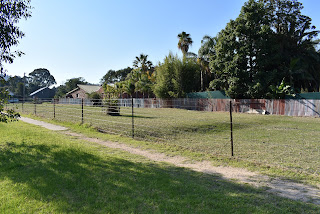 This is right in the area of the shoot out and the air felt alive with energy. I could not go into the ground where Ann Jones's pub was because it is fenced off. Therefor I was unable to pick up further energy for information. To be honest the children were more important that a shoot out with gangsters. I do not wish to hold gangsters up as shining examples of humanity and I do not want to get in to the politics of the Kelly gang. These men have family alive today and I have no intention of offending these innocent people. 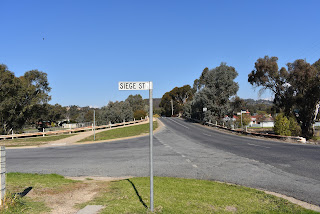 https://en.wikipedia.org/wiki/Ned_Kelly
For images of Glenrowan there are many on Google images to give you a good look at the little town. It is mostly a main street and residential area like any Australian country town. I am sure the people of Glenrowan are proud of their town too.
Copyright Alex Fulford 14th May 2017.
at Sunday, February 28, 2021