Spirit Dream About America From September 21 2014

Today I was going through a dream journal looking for something and to my surprise I came across this  item. I have written it word for word from page 36.

I had a dream early this morning about America (USA) being divided into two separate regions. I was
talking to someone in the dream. I can't recall who it was, but definitely a female. She  said tanks were being used in the streets. There seemed to be a TV screen behind her.
The feeling is something big is about to happen, this might lead to the US under martial law.


NOTE: I felt this was due to the Elections and Hillary Clinton being president of the USA. Take it from me this is the worst case scenario, and it is happening right now. I wish I could have better news, but I don't, I gave this warning on radio too last year, and  I have blogged about it to warn people.
It is officially locked in and there is no way out now. The American people in their inability to see through all of the deception are in grave danger, my heart goes out to them in their time of need. Sadly most of them would not see the warnings right in front of them.


What can one do when, those with eyes choose not to see and those with ears choose not to listen.
I know for a fact that Dr Luis Turi, has tried continuously  to get people in the US to heed his warnings too, but to no avail. What would a top rate Astrologer or a Clairvoyant know after all.

I can tell you also that Hillary Clinton when in office will purge the FBI of those that tried to expose her criminal activity too.
I do not see Hillary remaining in office for very long either.


Hold your loved ones close America and pray, that is all the advice I can give you. I hope that I am wrong, I would never wish this on a living soul. 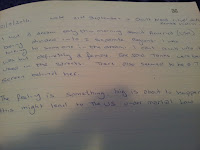 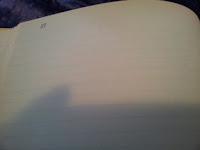 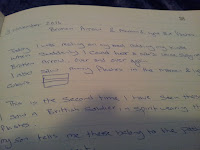 I have added images of my book so that you can see hand written notes and the consecutive order of the pages. This is a very large book which is used normally as a register in offices. I just happened to have an old unused one in my house that came in handy for me to write things in when  I have a vision or a psychic dream. These dreams and visions are very quickly forgotten usually so they need to be documented quickly or they are gone.
It took me a little while to work that one out lol.  Some visions are just so fleeting I think gee what was that. I never get shown it again. That I find most annoying.
http://theantimedia.org/media-silence-dapl-police-grenade/
November 24 2016, Notice they mention tanks!